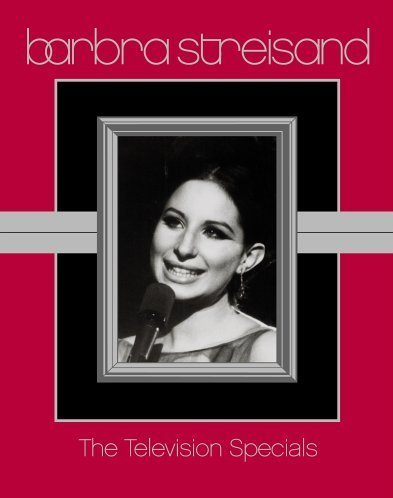 Box set featuring Barbra Streisand in five era-defining television specials that introduced her to the world. 'My Name Is Barbra' (1965) was Streisand's first solo television outing, featuring fantastic sets as a backdrop to her dynamic vocals. The programme won five Emmy Awards. A sequence at Bergdorf Goodman mixes satire with music and high fashion fantasy; her medley of songs includes 'Second-Hand Rose', 'Brother Can You Spare A Dime?' and 'The Best Things In Life Are Free'. 'Color Me Barbra' (1966) was aired just after Streisand had completed a successful Broadway run in 'Funny Girl' and had seven gold records to her credit. She sings surrounded by animals in a circus dream sequence and wanders the Philadelphia Museum of Art. In 'The Belle Of 14th Street' (1967), Streisand is joined by actor Jason Robards in this tribute to turn of the century vaudeville. Amongst the highlights is a duet with herself via the miracle of technology, and Streisand and Robards performing excerpts from the Tempest. In 'Barbra Streisand: A Happening In Central Park', an estimated 135,000 people jammed Central Park's Sheep Meadow for this free solo concert in 1968. Six televison cameras and a film camera mounted on a helicopter recorded this concert and the audience from every conceivable angle. Finally 'Barbra Streisand and Other Musical Instruments' (1973) was her first television appearance after a five year gap. It features over 150 musicians from around the world performing on almost every conceivable instrument.

A feast for Barbra Streisand fans, The Television Specials collects five one-hour programs she recorded between 1965 and 1973 when she was known simply as a recording artist and Broadway star rather than a film director, reclusive performer, and political activist. The first is My Name Is Barbra (April 14, 1965), shot shortly after she played in Funny Girl. Shot in black and white, it's a little different from the other variety shows of the day (e.g., "i"The Judy Garland Show) in that there's no parade of guest stars or dancing girls. That's a good thing, as those are the numbers that get dated very quickly . Instead, we have all Barbra, even if she's more comfortable singing than doing comedy monologues. The show winds its way through an Alice in Wonderland sequence which ends in a plain but magnificent rendition of "People," then has Streisand in a store's fur department. Last is a simple concert setting that includes a Funny Girl medley with "Don't Rain on My Parade" and "The Music that Makes Me Dance." The closing concert segment would become a staple, and the peak, of all her shows.

"i"Color Me Barbra followed on March 30, 1966 and is, naturally, filmed in color. The first sequence was shot at the Philadelphia Museum of Art, with Streisand wandering among the masterworks and antiquities, even singing "Where or When" dressed as Nefertiti. Next she's among a circus of animals, singing "Try to remember" to the elephant or poking fun at herself by telling the anteater "We have so much in common." Again, the final act is her just singing at a mike, with "Any Place I Hang My Hat Is Home" and "It Had to Be You." Making its home-video debut, The Belle of 14th Street (October 11, 1967) is something of an oddity. It's styled like a vaudeville show, with period costumes (including the audience) and old-time numbers. Jason Robards (singing and dancing!), John Bubbles, and others guest-star. Streisand plays a modest stripper for "Alice Blue Gown," plays an operatic diva for "Liebestraum," then does double duty as a boy (pre-"i"Yentl) in the audience invited to sing a duet of "Mother Macree" with the on-stage Streisand. The last segment is Streisand singing (accompanied on stage by David Shire before he wrote shows on Broadway with Richard Maltby) such songs as "My Melancholy Baby," "I'm Always Chasing Rainbows," and a medley that includes "My Buddy" and "How About Me?"

The highlight of the collection, A Happening in Central Park (September 15, 1968) is refreshingly free of gimmicks and concepts. It's just Streisand with an orchestra in front of a live New York audience. "The Nearness of You," "Cry Me a River," "I Can See It," "Second Hand Rose" (the audience enjoys singing along)," "People," and "Happy Days Are Here Again." "i"Barbra Streisand... and Other Musical Instruments (November 2, 1973) returns to the concept-show format. Streisand takes her place among the symphony orchestra members sporting her own instrument: her voice. One medley groups a number of favorite songs but in "international" settings, such as "People" accompanied by sitar and "Don't Rain on My Parade" by bagpipe band, and Streisand changes costumes to match. Ray Charles is on hand for four songs in the second set, then Streisand returns to the orchestra to sing such songs as "On a Clear Day" and "The Sweetest Sounds."

Picture quality is good, and sound is presented in original mono, 2.0 stereo, and 5.1 surround. The only bonus features are three introductions Streisand filmed for the 1987 home-video releases, but the set is beautifully packaged with a detailed booklet of liner notes, photos, and song lists. The five 50+-minute programs are ungenerously spread over five discs, however. --David Horiuchi

Hounslow named Council of the Year!

The London Borough of Hounslow has been crowned Council of the Year at the Local Government Chronicle (LGC) Awards Ceremony in Mayfair, London on Thursday 5 November 2021.

A to Z of services

Hounslow named Council of the Year

Are you part of the LGBTQIA+ community? Could you be a foster carer?

The Mayor of Hounslow

Hounslow Matters is the council's magazine for all local residents and businesses. The magazine is full of useful community news, about the services that matter to you.

We are committed to consulting as widely as possible when making decisions. Your views and feedback help us to develop the services we provide.

ICYMI: On Thursday night, London Borough of Nhlzj YANGXIAO Cigar Tube, Aluminum Cigar Storage Box, Ultraligh was named Council of Year at the #LGCAwads in #London. You c… https://t.co/PAQqjIlHVZ
Next weekend, the Dr Bike team with @Bikeworksuk will be at #Chiswick Common on Saturday 13 November from 10 am to… https://t.co/jE7IHFl6j6
The Domestic Energy Assessor Training is a 5 day course to qualify to carry out Energy Performance Certificate rati… https://t.co/UiAxK60C1D
Rongxin Portable 1 Piece Set of Cartoon Cute Sleeping mask Eye m

Local Information for your property

Use our map to find your nearest local services and facilities in Hounslow.